SKU
CM3311
Between 20 - 40 Reward Points will be used to purchase this product
Add to Compare
Update Required To play the media you will need to either update your browser to a recent version or update your Flash plugin.

In three movenents, this is a great challenge for any college level Horn Quartet:

One afternoon while working my summer job at the Air Force Armament Museum in Eglin, Florida, I was asked to dust off some artifacts in display cases. On the last display on the first half of the building I was stopped by one of my co-workers. He pointed out that this final artifact, a navigation tool, was hazardous because of the radioactive radium paint. This was a fact I was briefed on weeks earlier but had slipped my mind.

“There are three types of radiation”, he explained, “Alpha, which is pretty calm; Beta, which is a little gnarly but still alright. Finally, with Gamma – you’re screwed!”

Radicals follows this same concept musically.  Alpha is simple and serene; the quartet bounces between major triads and slight rhythmic alterations. Beta hinges between cute and troublesome in a squirrely scherzo while Gamma goes off the deep end and is extremely treacherous.

Radicals was premiered on April 5th, 2014 by Josie Wisser, Emily Judd, John Apostolides, and Katie Rudzik at the University of Central Florida. 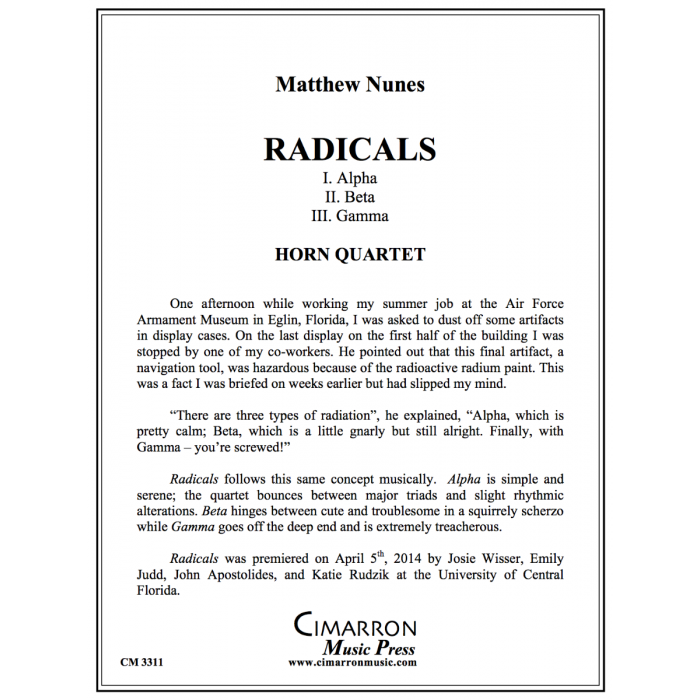