SKU
B0375
Add to Compare
Update Required To play the media you will need to either update your browser to a recent version or update your Flash plugin.
Written for Stefan Sanders, then bass trombonist with the Buffalo Philharmonic, and the 30th Anniversary of the International Trombone Association. In 3 movements, this colorful work was composed immediately following the important world events of September 11, 2001. It was premiered by Mr. Sanders and members of the University of North Texas Percussion Ensemble at the 2002 International Trombone Festival in Denton, Texas. It is in 3 movements: In Remembrance 9/11/01, Repercussions, and Renewal. Percussion Distribution - Percussion 1: Xylophone, tubular bells (chimes), suspended cymbal, snare drum, police whistle, and Chinese bell tree; Percussion 2: Vibraphone, 2 suspended cymbals, 4 tom toms, bongos, and wood block; Percussion 3: Marimba, tam-tam, lion roar, ratchet, slapstick, wind chimes, and suspended cymbal; Percussion 4: Marimba (to low A), timpani (4), tambourine, 2 cowbells, and suspended cymbal. "Buss’ melodies vary. They are mystic, poignant, heroic, often modal, and at times reminiscent of folk songs. He writes for the percussion ensemble with mastery and features a wide range of instruments. The sound landscape is rich with many moods and timbres. American Phoenix is an attractive addition to a solo program or as a feature piece for a percussion recital. It is rewarding for both performer and audience.” - The ITA Journal, January 2005
Skip to the end of the images gallery 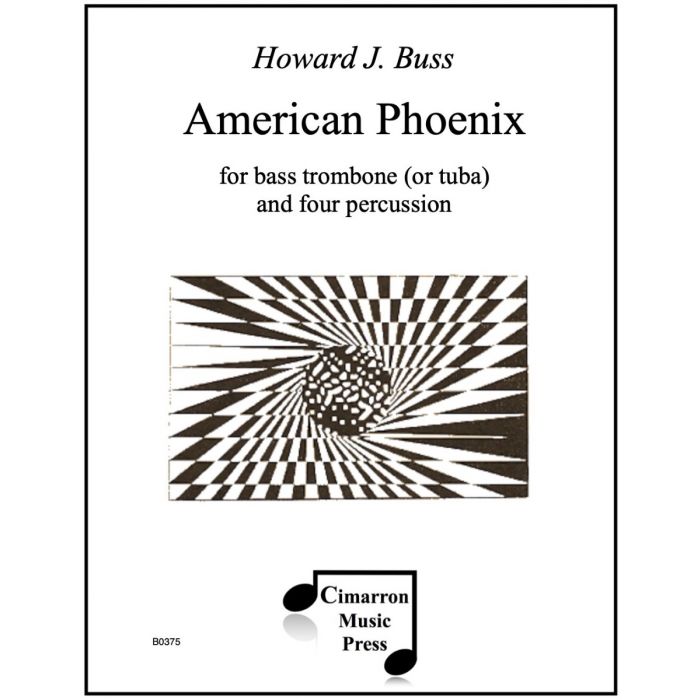